There is quite a bit of stylistic variety in the tracks that follow – yodeling cowboys, rowdy fiddle-and-banjo, otherworldly Hawaiian steel guitar, well-coordinated orchestra, sentimental singing – but they all have one thing in common. These artists were at the top of their game and used these recordings to prove it.

“Blue Moon” has been covered many times throughout the years, most famously by the Marcels in 1961. The original 1934 recording by the Casa Loma Orchestra may beat them all, though. For a song so familiar, it is amazing how much this recording continues to delightfully surprise. The combination of Kenny Sargent’s measured, melancholy vocals and the orchestra’s spot-on accompaniment is out of this world. From Glen Gray’s airy baritone sax to the bouncing rhythm section to Pee Wee Hunt’s dreamy trombone, every detail is perfect. 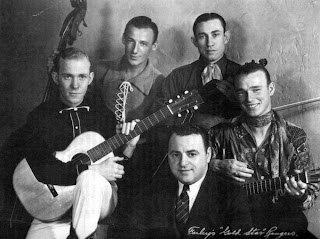 By the mid-1930s, nostalgia for United States’ frontier days had reached a boiling point, resulting in a slew of Western-themed Hollywood movies. These movies romanticized the Old West and the lives of early settlers and cowboys, many of them featuring humor and music. In short order, a whole new style of “singing cowboy” music emerged, giving a the simple singing style of the original settlers a highly polished pop makeover. The Sons of the Pioneers were one of the style’s first and most successful artists, and “Way Out There” was one of their earliest hits. The song tells the story of a man who sneaks a free ride on a train, only to find himself kicked off the train “way out there.” In layered harmony, the singers conjure endearingly lonesome images of the unpopulated desert plain. The record is paced by a fast, bouncing guitar that conjures the clickety-clack of the train on the tracks. Some wonderfully harmonic yodeling in the chorus invokes a harsh train whistle at first, then softens and quickly turns lullaby-sweet.

They may have changed their name from the Kentucky Ramblers to the Prairie Ramblers to capitalize on the country’s Western craze, but with “Shady Grove” this incredibly versatile group proudly and ably displayed their Appalachian string band roots. Their fast ensemble playing may not have quite been bluegrass, but the seeds of that later style are certainly present in this raucous, entertaining romp. Multi-part harmony alternates with rapid banjo picking, fiddling and whoops of genuine joy: “Wooo-ha-ha! Come on boys!” That energy is infectious, and listening to this record you’ll be hard pressed not to whoop along. 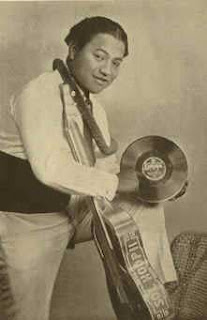 No one did more to popularize the Hawaiian steel guitar than virtuoso Sol Hoopii (pronounced “Ho-oh-pee-ee”). After honing his skills in his native Hawaii, Hoopii relocated to California in the 1920s. He soon found a very receptive public and by the mid-1930s he was making what are now considered his greatest recordings. “Hula Girl” is perhaps the best example of his genius. Although the steel guitar, ukulele and subject matter clearly mark the record as Hawaiian, those elements are actually little more than novelty layered over a jazzy little pop song. Indeed, Hoopii takes the steel guitar far beyond what most people would think of as Hawaiian music, soloing with all the creativity and dexterity of a master jazz musician. As rapidly as he picks the guitar, he still manages to use the slide continuously and expertly, adding an unpredictable and exotic dimension to his playing. For those used to hearing slide guitar in the more reserved setting of blues or country music, it is eye-opening to hear it played this way. With the ukulele providing a steady beat, Hoopii creates a dazzling array of sounds, rapidly careening from zany to dreamy and back again. His sense of timing is impeccable, and the entire performance is highly entertaining. 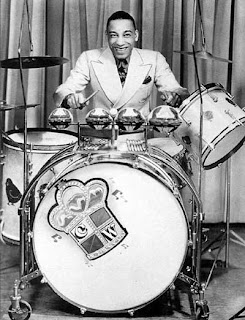 From looking at William Henry “Chick” Webb, one would hardly believe he’d have the stamina to be a drummer, let alone one of the best of his generation. Despite short stature (he was under five feet tall), a hunchback and chronic health problems caused by tuberculosis of the spine, he and his orchestra managed to make the biggest, most robust swing music of their time. Listen to “Stomping at the Savoy” and you’ll have no doubt why this band consistently won the Savoy Ballroom’s “Battle of the Bands” contest to claim the title of best band in New York. Right from the beginning, the group sounds incredibly tight. The bouncing bass keeps rhythm while the horn section and tenor sax engage in a playful exchange. The music is incredibly well choreographed, but never predictable: it retains a sense of whimsy and a swinging beat throughout. The middle section of the song is simply tremendous: an irresistible dialogue between the Sandy Williams on trombone and Elmer Williams on tenor sax is followed by one between Taft Jordan on trumpet and Edgar Sampson on alto sax.

In the background, Webb’s well-timed drums are ever present. They begin tame enough, but increase in volume throughout the song. At the end of that magnificent middle solo section, Webb keeps the record moving along through sheer force of will, summoning the full band back into action as he pounds the drums with incredible ferocity. From there until the end of the song, the band does all it can to keep up with Webb. He briefly cedes the floor to the tenor sax, then returns with even more energy, propelling the song to its conclusion.

As incredible as his piano playing was, Waller’s true legacy lies in his remarkable songwriting. “Honeysuckle Rose” is his most beloved composition and has become a giant among jazz standards. Waller’s original recording remains hard to beat, though. It starts with some of Waller’s dazzling yet seemingly effortless piano playing, of course, but the vocals soon become the focal point. Waller often took a comical approach to singing, but only a touch of that comes through here as he keeps things mostly on the sweet side: “When I’m taking sips / from your tasty lips / the honey fairly drips.” Waller is backed up by a small group that adds just the right touches, and the end result is just delightful. After the first verse, the band plays a lovely interlude where Waller’s sweet piano is accompanied by a repeated trumpet theme. When Waller returns to singing after the bridge, the energy level of the record has risen to joyous levels and the charming main melody returns with a full, exuberant sound that is hard to resist.

~ You may also like a great group recording of this same song, featuring Waller on piano, Bunny Berigan on trumpet, Tommy Dorsey on trombone, Dick McDonough on guitar and George “Georgia” Wettling on drums: A Jam Session at Victor, “Honeysuckle Rose” (Victor 25559, 1937)
Posted by Rico Detroit at 6:00 AM