In 1929, Louis Armstrong moved back to New York and Okeh began billing his band as the “Savoy Ballroom Five,” but like the previous “Hot Five” records, the personnel involved varied. On “Mahogany Hall Stomp” (recorded in March 1929 and released in April), the group grew to 10 musicians, which would prompt Okeh to bill all subsequent ensembles as an “Orchestra.” (This would be true even of “Basin Street Blues” and “Muggles,” which had actually been recorded in late 1928 in Chicago with a smaller band of six musicians, but were not released until May and July of 1929, respectively.)

“Mahogany Hall Stomp” is incredibly fun to listen to. The song starts off with a straight-ahead solo by Armstrong on trumpet followed by a short, enjoyable stretch by Albert Nichols on alto sax, and some fancy guitar work by Lonnie Johnson. Then Armstrong returns with a mute, and heats things up quite a bit. As he did on “West End Blues,” Armstrong brilliantly sustains a single note over several bars, this time with Lonnie Johnson picking out a quiet melody behind him on guitar. Armstrong fades the note to a whisper in the middle, then crescendos and comes out at the end with a series of very controlled, staccato notes that allow the rhythm section to rise to the foreground with a compelling beat. As Armstrong finishes, J.C. Higginbotham enters on trombone and keeps the fun going with a very swinging solo. Armstrong then comes back without the mute to finish things up. Throughout the song, the band plays in an easy-going style that is halfway between New Orleans jazz and big band swing, with a prominent bass line that keeps things jumping and makes it hard not to tap your toes.

“Basin Street Blues” (named after a street in New Orleans’ French Quarter) is a much softer recording that features Armstrong and Earl Hines passing the melody back and forth. The record begins with a quiet introduction featuring Hines on the celesta, a piano-like instrument with a tinkling sound similar to a music box. Armstrong then enters with a reserved trumpet solo, followed by Hines similarly reserved on piano. Armstrong then adds some soft, sweet scat singing (with Hines and banjo player Mancy Carr humming softly behind him), and Hines adds some more piano. Armstrong comes back with a more forceful trumpet solo that soars higher and higher, and the rest of the band rises to meet him (especially Fred Robinson on trombone). Armstrong then softens again and fades out, as Hines re-enters on celesta to bring the lullaby to a beautiful close. 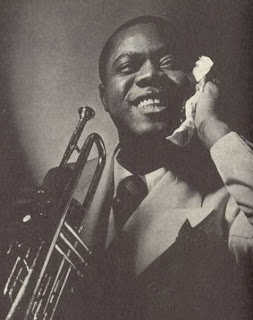 “Muggles” is one of Armstrong’s subtle masterpieces. Like “Basin Street Blues,” it is a slower number that takes its time unfolding before reaching a crescendo and then fading out again at the end. Earl Hines starts things off with a quiet but very inventive piano solo. Fred Robinson and Jimmy Strong then add mellow solos on trombone and clarinet, respectively – both of which reflect rather well on the song’s title, which was slang for marijuana. Armstrong then enters with a forceful trumpet solo. At this point, the rhythm section initially starts playing double time, and the excitement level ramps up significantly, but they soon slow back down and Armstrong’s solo becomes very mellow itself. Hines returns at the end with some more noteworthy piano improvisation behind Armstrong’s solo.

“Ain’t Misbehavin’” was written by Fats Waller, who made a solo piano recording of it in 1929. It was also featured in the hit Harlem show Hot Chocolates that year, where it was performed to great reviews by none other than Louis Armstrong. It would become one of his signature songs, and this record shows why. Although well executed, the recording doesn’t break any new ground for him in terms of trumpet playing. (He still manages to make it exciting, though, especially at the end, where he finishes on a high note – both literally and figuratively.) However, it features some great singing from Armstrong that shows his ability to improvise vocally as well as with his trumpet. He varies the melody, the words and the timing as he sings, making everything sound effortless while creating a blueprint that top jazz singers continue to follow.