From intricate guitar work to improvised jugs and kazoos, 1929 was an incredibly prolific year for the blues. The following selections show off some of the great diversity released that year. 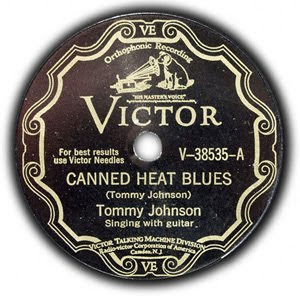 Tommy Johnson’s slavish addiction to alcohol has been well-documented, but perhaps nowhere better than the autobiographical “Canned Heat Blues.” This being the age of Prohibition, alcohol was not always readily available, so Johnson fed his addiction in any manner he could. There are stories of him consuming shoe polish for its alcohol content, for example. This particular song focuses on the practice of drinking denatured alcohol from cans of Sterno “canned heat” cooking fuel. Johnson is fully aware how desperate and risky this is, singing: “Crying, mama, mama, mama, you know, canned heat killing me.” And yet he is unable to stop himself, adding: “I woke up this morning with canned heat on my mind.”

Johnson’s distinct voice sounds incredible here, complete with trademark falsetto flourishes in the last line of each verse, which makes the song all the more poignant. Never has a cry for help sounded so hopeless or so beautiful. Johnson’s guitar keeps a slow but firm rhythm, while creating some amazing harmonic tension with the vocals. Perhaps the best moment comes in the very last verse. Johnson sings the line: “Believe to my soul, Lord, it gonna kill me dead,” then leaves the rest of the verse unsung with just his guitar playing. The guitar continues on for a short while after that, slowing down as the melody unravels and comes to an end.

The alcoholism soon took its toll, and while Johnson remained a popular performer in the Jackson, Mississippi area, he made only a handful more records and then never recorded again. 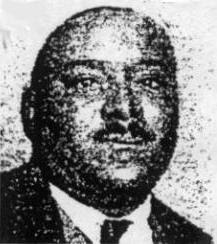 Georgia’s Joshua “Peg Leg” Howell (he lost his leg as the result of a shotgun injury received during an altercation with his brother-in-law) was one of the earliest country blues artists recorded. While he wasn’t the strongest singer or musician, he had a personable style and a remarkable range – playing everything from folk ballads to uptempo, jazzy numbers. “Broke and Hungry Blues” is one of his best known recordings. It had been written and previously recorded by Blind Lemon Jefferson (Paramount 12443, 1927), but Howell’s version surpasses even the legendary Texan’s. Howell’s guitar playing is a hybrid between the dominant Piedmont style and the older, “frailing” style; he plays proficiently but slowly, without an excess of flashy fingerpicking. He is accompanied by Eddie Anthony, a frequent collaborator, who plays fiddle with similar, deliberate pacing. Howell’s voice is unrefined but endearing, delivering the stellar lyrics with conviction: “I’m sick, broke and hungry, good gal done drove me away / I’m outdoors, mama, ain’t got nowhere to stay.” Both Howell’s voice and Anthony’s crying fiddle display considerable vibrato, which adds an immediacy to the narrator’s hopelessness.

“Fishing Blues” is the greatest example of Henry Thomas’ style. Despite the title, this is pretty far from the blues. It is a simple song about the joys of fishing, and it bounds forward on the strength of his jaunty guitar playing and pleasant voice. But what truly stands out are the pan pipes parts between verses. This is an amazing, unexpected sound that instantly draws in the listener and makes the performance unforgettable. 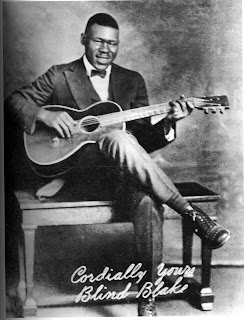 Blind Blake is famous for his incredibly active and intricate guitar picking style. “Diddie Wa Diddie” is one of his most popular recordings, and demonstrates his ability to create a complex sound on his six-string guitar that was reminiscent of a ragtime piano. Blake sings the simple but amusing lyrics in a very relaxed style that resembles a lot of the other country blues of his day. The guitar is another story all together, though. The syncopated melodies he creates behind the vocals are impressive enough on their own, but between verses, he really lets his fingers fly and creates something remarkable that no one else has ever duplicated.

Almost nothing is known of Blake’s personal life. After the Great Depression hit, he simply faded into anonymity and was never heard from again.

~ You may also like some more of Blake’s amazing fingerpicking: Blind Blake, “Blind Arthur’s Breakdown” (Paramount 12892, 1929) 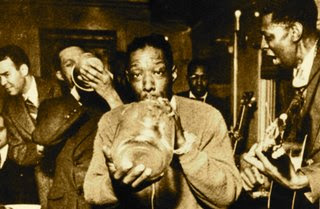 This is a great record from the opening train-whistle harmonica to the final, hummed note. Everything from the harmonica-and-kazoo choruses to the slightly out-of-sync, three-part harmonies has a bittersweet feel to it. The band gives an amazing performance that convincingly evokes the motion of a train, and the brief lyrics conjure a compelling picture: “I thought I heard that K.C. when she blowed / She blowed like my woman’s on board.” The final verse contains no words, just some lovely, introspective humming until everything but the voices fade out for the final note.

Memphis did not have a monopoly on jug band music, as this enjoyable instrumental number by the Cincinnati Jug Band illustrates. The use of the jug is very prominent, as in addition to keeping rhythm, the jug player makes his instrument wail periodically. The instrumentation also features harmonica, guitar and washboard, and the sounds all combine into an unusual but very soulful record.