We don’t usually associated yodeling with country music these days, but there was a period of time where the two went hand-in-hand. Jimmie Rodgers wasn’t the first to yodel on record, but its great popularity can largely be credited to him, and listening to these three songs, it is not hard to see why. Like the Carter Family, Rodgers brought exquisite craftsmanship to his vocals, but he also brought unrivaled showmanship. He freely borrowed from the blues, jazz and vaudeville traditions, and managed to give his music a professional polish while still paying homage to its rural roots. He became country music’s first big star, and his influence continued to be felt long after his death from tuberculosis at age 35 in 1933. 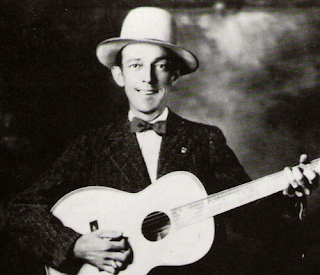 Jimmie Rodgers
“Blue Yodel (T for Texas)” (Victor 21142, 1928)
“T for Texas” was Rodgers’ signature song, and it remains one of the greatest and most influential country records ever made. It owes a huge debt to the blues: it follows more or less the twelve-bar blues structure, and features a lone voice singing a tale of woe over a simple guitar accompaniment. But there is much more to the song than that. For one thing, even though the subject matter at times gets rather dark, his voice is rather upbeat. And it sings some truly great lyrics. At one point he threatens to shoot the woman who left him for another man, but other lines indicate maybe he’ll just move on: “If you don't want me mama, you sure don't have to stall / 'Cause I can get more women than a passenger train can haul.”
The most distinctive feature of the song, of course, is the yodel. This may not make sense until you’ve heard it, but it is a very bluesy yodel. Rodgers is a master at modulating his voice between a plaintive holler and a lonesome falsetto, and he is able to expresses more through those yodels than anything else in the song. Plus, they are just downright fun. (Although if you try to imitate them, you will soon get an appreciation for just how precise Rodgers’ vocal control was.)
~ You may also like the rest of Rodgers’ 13 “blue yodels,” the most striking of which is his jazzy collaboration with Louis and Lil Armstrong: Jimmie Rodgers, “Blue Yodel No. 9 (Standin’ on the Corner)” (Victor 23580, 1931)

“In the Jailhouse Now” is another of Rodgers’ most popular compositions, and has been covered many times. This is a mellow song, buoyed by gentle banjo and guitar. Rodgers keeps his pleasant voice very moderated, and except for an easy-going yodel between each verse, he mostly lets the humorous lyrics do the heavy lifting. He tells a simple story about a friend who always gets into trouble with the law: “I told him once or twice to quit playing cards a and shooting dice / He’s in the jailhouse now.” In the end, however, the narrator gets himself in hot water, and the song brilliantly ends with the narrator “in the jailhouse now,” as another gentle yodel closes the song. 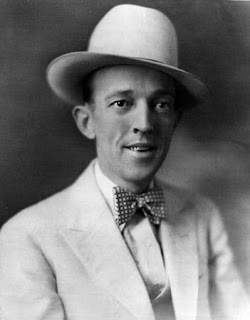 The B-side to “T for Texas” was a wonderful song called “Away Out on the Mountain.” This is much slower, with a sweet melody and Rodgers’ trademark witty lyrics. I especially like the way he sings, “Where the wild sheep grows and the buffalo lows” in the second verse: his timing is perfect, and his voice is rich with character. And yes, there is more yodeling: this time reaching further and more consistently into the falsetto range in what turns out to be the perfect punctuation for this beautiful, whimsical song.