As the United States transitioned to an increasingly urban society, it was inevitable that rural music traditions like the blues would evolve, too. The next two recordings are early examples of that shift to a new, more polished blues sound. 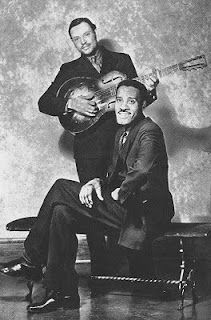 Hailing from Indianapolis rather than from the deep south, pianist/vocalist Leroy Carr and guitarist Scrapper Blackwell were pioneers of a new, “urban” blues sound. Carr and Blackwell created a more sophisticated sound that retained the spirit of country blues, but with the rough edges smoothed out and a decidedly jazzier feel.

“How Long, How Long Blues” was the duo’s first hit and would remain their signature song until Carr’s death in 1935. Carr’s smooth, pleasant singing style bears little resemblance to the loud, rough style of many previous blues artists, but still manages to capture the emotion of the song incredibly well. Blackwell’s jazz-like, single-string guitar technique is simply amazing to hear, and it combines beautifully with Carr’s rolling piano to provide a soulful, melancholy backdrop throughout the record.

Hudson Whittaker adopted the name “Tampa Red” after moving in the 1920s from Florida to Chicago. He proved very influential in refining the city’s urban blues sound with his smooth, single-string bottleneck guitar style. “It’s Tight Like That” offers a good example of that well-polished sound, including some wonderfully bent notes during the bridge about half-way through. Tampa Red is joined on this record by “Georgia Tom,” none other than Thomas A. Dorsey, who would later gain fame composing gospel songs. This song’s hokum lyrics are about as far from gospel as they could get, however, and are full of bawdy double-entendres: “I went to see my gal up across the hall / Found another mule kicking in my stall!”