In 1929, Louis Armstrong would return to New York and would work from that point on with a full orchestra. First, though, he would spend 1928 making several more classic small-group recordings in Chicago, including some that would rank among the best of his career, like the immortal “West End Blues.” 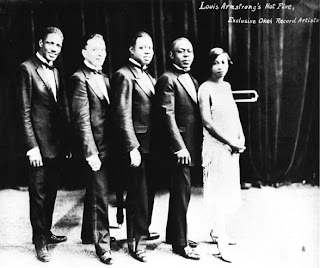 After the Hot Seven recordings in the spring of 1927, Louis Armstrong’s group returned to its classic Hot Five lineup, which would last for only a few more sessions. These two selections were both written by Armstrong’s wife, Lil, and feature some of the group’s best work.

For “Hotter Than That,” the ensemble could have actually been called a Hot Six, because they are joined by Lonnie Johnson on guitar. The record sets the tone early with solos from Armstrong on cornet and Johnny Dodds on clarinet. Then Louis Armstrong launches into a long scat singing section, which evolves into a mellow but riveting exchange between his voice and Johnson’s expertly picked guitar. Lil Hardin Armstrong’s booming piano jump starts the action again, and the band kicks back in as lively as ever. Kid Ory gives us a short, swinging solo on trombone, then Armstrong’s cornet takes over. The band backs him up with a little stop-time playing, and then Johnson’s guitar returns for some more quick fingerpicking to end the song.


“Struttin’ with Some Barbecue

” evolves so wonderfully throughout the course of the record that by the time it returns to the main theme again at the end, it almost sounds like a completely different song. It starts with some fantastic interplay between Armstrong’s cornet, Ory’s trombone and Dodds’ clarinet. The three then take turns soloing: first Dodds, then Ory, then Armstrong. It all sounds incredible: this is a fantastic melody and the soloists do a wonderful job with it. Then the real fireworks happens, just over two minutes into the song, as the band starts playing stop-time and Armstrong’s cornet kicks things up a notch. And again, as good as it was at the beginning, by the time the song reaches the final few bars, with the band all playing stop-time in unison, it is magical.
~ You may also like: Louis Armstrong and His Hot Seven, “Willie the Weeper” (Okeh 8482, 1927) 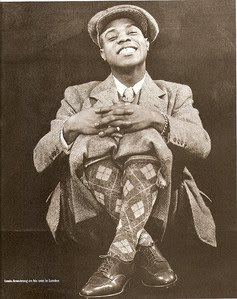 Louis Armstrong and His Hot Five
“West End Blues” (Okeh 8597, 1928)
Armstrong reassembled his “Hot Five” band in June 1928, but with entirely new personnel. Despite such changes, the group was able to continue making some incredible music, including this recording of the Joe “King” Oliver composition “West End Blues” (named for a section of New Orleans). In fact, this would prove to be the single most beautiful record Armstrong would ever make: every note is simply perfect.
The record starts with a dramatic call-to-arms from Armstrong’s cornet, which effortlessly glides into an easy-going twelve-bar blues. Fred Robinson’s trombone takes the first solo atop some atypical, clinking percussion from Zutty Singleton (whose presence actually made this group a “Hot Six”). Jimmy Strong’s clarinet then trades off in a duet with Louis Armstrong’s very relaxed and peaceful scat singing. Earl Hines, one of the all-time great jazz pianists, then takes a turn with a very inventive solo that manages to be technically impressive while maintaining the easy-going flow of the song.
Next comes Louis Armstrong with one of the most famous solos in jazz history. Listen to how he sustains the opening note: even though the pitch stays constant, he brings that single note to life with vibrato and changes in volume, until the pent up energy finally comes tumbling out in the end in an impressive cascade of notes. Like Hines’ solo earlier, Armstrong manages to sound fresh and innovative without losing the song’s easy-swinging spirit. It is a sublime moment, over far too soon, that both sums up everything he has done to that point and shrewdly predicts the possibilities jazz has left to explore. A final strike of the woodblock from Zutty Singleton puts an exclamation point on this record, the pinnacle of 1920s jazz.
~ You may also like: Louis Armstrong and His Savoy Ballroom Five, “Tight Like This” (Okeh 8649, 1928)
Posted by Rico Detroit at 5:30 PM