While hot big band jazz was just starting to simmer, small group jazz was already cooking. The next few years would see it reach its zenith with groundbreaking performances by Louis Armstrong, Jelly Roll Morton and others. 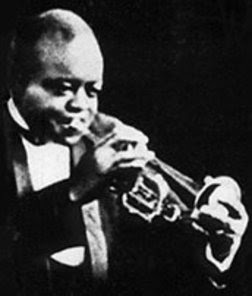 (Note: there were two takes of this song, both released as Vocalion 1007. Both are good, but the second take, session no. E-2635, is the better of the two and the one discussed here. The first take, E-2634, contains more ensemble playing and less soloing. It also contains vocals by Richard M. Jones – “Oh, Snag It! Snag It!” – that are not found in the more famous second take.)

Joe Oliver may not have achieved the career heights of his former protégé Louis Armstrong, but as “Snag It

” shows, there was a reason they called him King. This record contains some of the most memorable playing of his career. His cornet is in control right from the start, kicking things off with a wailing call and then leading the rest of the band swirling behind it. The band is simply magnificent, especially some almost-squeaky, staccato accents from tenor saxophonist Barney Bigard and a slow, yearning solo from Kid Ory on trombone. After the solos, Oliver returns with a brisk, eight-bar solo that sounds like a rallying cry and stands in brilliant contrast to the generally relaxed feel of the rest of the song. The band then once again weaves beautiful ensemble work behind Oliver’s magnificent cornet as he winds things down and slowly brings the record to a conclusion.


After his stint with Fletcher Henderson, Armstrong returned to Chicago and finally put together a band of his own. That group was a who’s who of jazz greats dubbed the “Hot Five,” and while it really only existed in the studio, that was enough to cement Armstrong’s legacy. In addition to Armstrong, there was first and foremost the legendary Kid Ory on trombone. This was the man who was credited for single-handedly defining the role of the trombone in New Orleans jazz, who had given Joe Oliver the nickname “King” when he served in Ory’s band, and who had cut the first record by an African American jazz band (“Ory’s Creole Trombone” in 1922). In addition, Armstrong recruited fellow King Oliver’s Creole Jazz Band veterans Johnny Dodds on clarinet (who was himself approaching legendary status), Johnny St. Cyr on banjo, and Lil Hardin Armstrong on piano. Lil and Louis had married in 1924, and it was she who convinced Louis to return to Chicago. 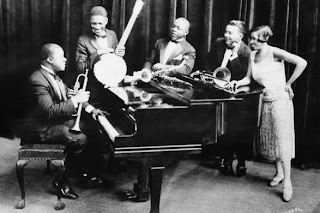 The band first entered the studio in November 1925, and the results were instant magic. The following February they recorded a slew of new songs and found their first hit in Kid Ory’s “Muskrat Ramble

.” That Armstrong is fantastic almost goes without saying, but Kid Ory comes close to outshining him. In fact, the entire band is incredibly tight, but it is Ory’s trombone that ties it all together, matching Armstrong note for note and underscoring his best moments with a slow slide. It is arguably the best trombone jazz part ever recorded.
~ You may also like the first recording ever released of New Orleans jazz featuring African American musicians: Kid Ory’s Original Creole Jazz Band, “Ory’s Creole Trombone

Amazingly, the other side of the “Muskrat Ramble” record was every bit as good. “Heebie Jeebies

” starts out with a melody so pure and so wonderfully performed by the band that the song would have surely been considered a classic on that strength alone. But what truly makes this special is Louis Armstrong’s first-ever vocal performance on record. Over St. Cyr’s simple but swinging banjo part, Armstrong’s unmistakable voice is raspy but rich as he proceeds to sing and scat the most wonderful nonsense. (Sample line: “Sweet mama, papa’s got to do the Heebie Jeebies dance.”)

~ You may also like: Louis Armstrong and His Hot Five, “Dropping Shucks

” is yet another undeniable classic recorded in the same February 1926 session as “Muskrat Ramble” and “Heebie Jeebies.” The degree of innovation here is unbelievable, as the band puts on a clinic on timing. Armstrong has two memorable solos here that make use of stop-time playing (where the normal rhythm is disrupted by brief periods of silence). The first contains a section where the entire band stops and starts in unison with him, and Johnny Dodds mirrors him note for note. In the second solo, the band again stops and starts in unison, but Armstrong’s timing is more loose as he plays – brilliantly – during the gaps to varying degrees.

This record sometimes gets overlooked in the Armstrong cannon just because 1927’s “Potato Head Blues” is the most impressive and beautiful display of stop-time ever recorded, but Armstrong’s playing on “Cornet Chop Suey” is so fresh and imaginative that the record really deserves to stand on its own.

The Black Bottom was a dance that became a craze in 1926 and briefly overtook the Charleston as the most popular dance. After the dance was featured in several stage shows, popular bandleader Johnny Hamp and his group capitalized on its success with this

superb record. If you compare this to what Louis Armstrong or Jelly Roll Morton was doing at the time, you will notice how straight-forward the solos are and how little improvisation there is. But while this was less technically impressive, it was still surprisingly good jazz, with a sense of fun that cannot be denied. The musicianship and timing are first rate as the different instruments dance in and out of the tune for a few notes at a time. And there are numerous whimsical little touches that keep you on your toes: from the opening call of “Do-do-do-di-lo” to a few unexpected strikes of the woodblock. The best touch, though is the handclapping at about the two minute mark: priceless.

~ You may also like: Abe Lyman’s California Orchestra, “Shake That Thing

Jelly Roll Morton was a was a larger-than-life character who got his start playing piano as a teenager in seedy establishments in “Storyville,” New Orleans’s red-light district. He soon grew into jazz’s first great pianist and composer. Working in Chicago in 1926, he assembled a studio group of some of jazz’s brightest stars. Called the Red Hot Peppers, they soon began a string of some of the most exciting jazz records ever made.

” (reportedly named by Morton after the Black Bottom neighborhood in Detroit, and not necessarily for that year’s dance craze) was the group’s first hit, and is an excellent example of Morton’s ability as an arranger: as good as Morton is on the piano, the band is his real instrument here. Morton gets the most out of his musicians (who included trombonist Kid Ory and banjoist Johnny St. Cyr from Louis Armstrong's band), maintaining high levels of both energy and virtuosity throughout. The pace is frenetic and the instruments often seem to be running wild, and yet it all fits together brilliantly.

~ You may also like: Jelly Roll Morton and His Orchestra, “Burnin’ the Iceberg