As the Roaring Twenties began, vaudeville-inspired novelty records still dominated, but a new level of sophistication was beginning to be heard as music was made specifically for this medium. The possibilities of jazz were also being explored, and the public’s appetite for this new style was reflected even in the music of ballroom orchestras. After all, entertainment was the name of the game. 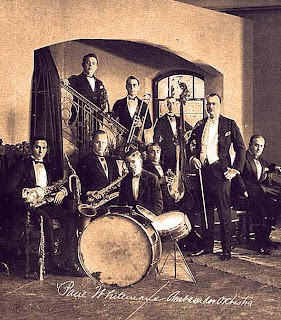 The 1920s saw an explosion of commercially recorded music, and no one was more popular than Paul Whiteman. The so-called “King of Jazz” didn’t play what we would think of as jazz today. Whiteman borrowed ideas from jazz and incorporated them into society-band dance music. Although it sounds innocuous to us today, this was borderline risqué music in its time – and immensely popular, as this song spent 11 weeks at #1 on the pop charts.

This is the kind of music you hear in the background of many pre-war films, and it sounds very much of its time. The novelty of this

particular song is the high-pitched whistling that mostly floats above the melody (taking center stage only briefly about a third of the way into the song) and adds a fun, almost carnival-like quality to the record.


~ You may also like: Paul Whiteman & His Ambassador Orchestra, “Wang-Wang Blues

Bandleader Ben Selvin was second in popularity only to Paul Whiteman in the 1920s. This

record became the first ever to sell five million copies. It is another society dance record that seems to be exploring all of the novel possibilities that jazz held. It is a fun listen with light, breezy melodies floating above an animated rhythm section, and punctuated by comical outbursts, such as the unexpected, crying “wah-wah-wah-wah” sound that ends the record.

Al Jolson
“Swanee” (Columbia A2884, 1920)
The “world’s greatest entertainer” had a big, expressive voice that came across well in the murky-sounding acoustic recordings of his day. He was the foremost blackface entertainer of his day, a decision with racist implications that would ultimately hurt his legacy, but which helped him become the most successful entertainer in the U.S. in the 1920s. (Today, Jolson is most remembered for his lead roll – in blackface – in 1927’s The Jazz Singer, the first full-length motion picture to use sound.)

” was a big hit for him in 1920, and was the first of many hit songs written by George Gershwin. With its overly sentimental lyrics and melodramatic style – not to mention bird calls added for effect – it is hard to see this as anything other than a silly novelty. Still, it is a well-executed performance and a good example of the vaudeville-inspired style of the times. 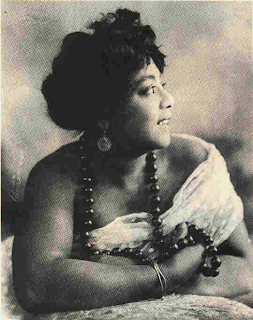 is the first “blues” record ever made. Its vaudeville-style vocals and jazz-like accompaniment distance it somewhat from the authentic “country blues” performed by most blues musicians of the day, but its extraordinary success (it sold a million copies in just six months) opened the door for more of these “race recordings.”
Indeed the vocals feel a lot more like the blues than any previous vaudeville recording ever had. While the high notes have a tendency to sound showy, the lower notes are deeply expressive, hinting at the potential that would soon be realized as more and more African Americans were given the chance to record. Those low notes might even qualify as melancholy were it not for the upbeat, novelty sound of the accompaniment. It is a fascinating – and quite enjoyable – recording, in part for that very reason: a unique musical experiment that both stood apart and became highly influential.
~ You may also like: Mamie Smith & Her Jazz Band, “Dangerous Blues” (Okeh 4351, 1921)
--------------------------------
1921 Headlines … Warren G. Harding is inaugurated as 29th U.S. president. … First Miss America Pageant is held in Atlantic City, N.J. … National Football League founded. … Ireland gains independence from U.K.
-------------------------------- 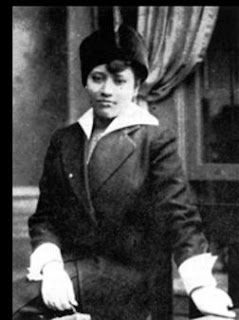 Like Mamie Smith, Lucille Hegamin’s background was more vaudeville than blues, but that didn’t stop her from becoming one of the most popular blues singers of her day. “Arkansas Blues

” was her first big hit and perhaps the best showcase for her appealing style. Her bright voice comes across well, conveying a nice blend of blues emotion and pop sensibility. Her backing band does a nice job adding a light, jazzy touch to the song, especially Clarence Harris on alto sax who shadows Hegamin throughout.

~ You may also like: Lucille Hegamin & Her Blue Flame Syncopaters, “He May Be Your Man (But He Comes to See Me Sometimes)

This was one of the most popular songs of 1921, and has been recorded by numerous acts since then. In this early recording, comic vaudevillian team Gus Van and Joe Schenck (pronounced “Skenk”) cheerfully tell the story of a couple beset by troubles but ever optimistic. Their situation is best described by a line that you expect to rhyme, but that humorously gets to the point instead: “There’s nothing surer / The rich get rich / And the poor get children.”

~ You may also like: Billy Jones, “Yes! We Have No Bananas