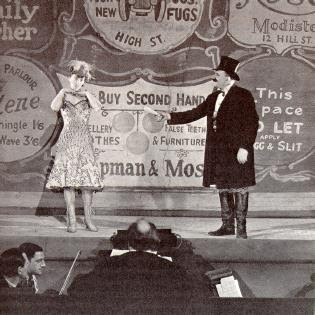 Before radio and film, mass entertainment was accomplished by means of live variety shows featuring music, humor and other forms of entertainment. In the late 1800s, these shows became known as “vaudeville” (from the French term “voix de ville,” or “voice of the city"). Vaudeville performers needed to have big, expressive voices, as there were no microphones, and that limitation influenced the overall tone and style of vaudeville: there was nothing subtle about it!

With vaudeville dominating people’s notions of entertainment, popular music was not seen as a stand-alone art form at that time, so much as it was seen as just one facet of “entertainment” overall. Where there was music, there was often broad comedy or some other dimension as well.

Early recordings often played to the public’s appetite for vaudeville with over-the-top humor and gimmicks. In addition, as recording technology was itself a novel development, it is not surprising that many early recordings explored unusual sounds and tested the limits of what the technology could do.

In short, as the following recordings demonstrate, it was the age of novelty. 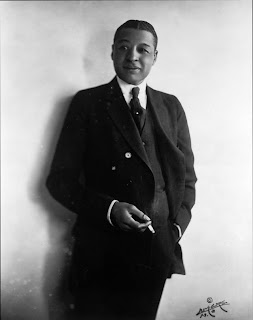 Egbert (“Bert”) Williams was one of the most popular entertainers of the vaudeville era, and was one of the few African American artists afforded the opportunity to record in the years before 1920. “Nobody” was his masterpiece and would become his signature tune. His entertaining, half-sung-half-spoken  delivery is the main attraction. The way he pauses at the end of each stanza before saying “Nobody” is gold, as is the drawn-out strain in his voice as he sings each chorus.

Listing to this and other recordings by Williams, it is easy to see why he was so tremendously popular in his day. It is tragic that he did not get the chance to solidify his legacy and isn’t better remembered today. Unfortunately, he died of pneumonia in early 1922 just as the recording era was getting into full swing. 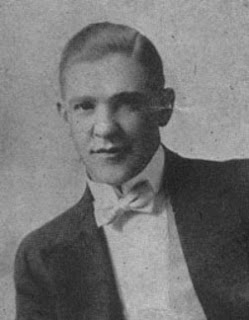 The music on this

recording is like a carnival. The arrangement resembles a march, with a tuba keeping the rhythm, but numerous sound effects are added, from flittering flutes to something resembling a duck call. What makes the record particularly entertaining, however, is its use of what would later be called “scat” singing, with nonsense syllables (“king-ga-zoo-ga-roo-ga-doo”) sung to the melody. Greene does a marvelous job keeping the record entertaining, especially at the end where he sings in a variety of different voices while interjecting scat syllables into every word.

~ You may also like a recording with much the same musical structure but a very different vocal style: Nora Bayes, “How Ya Gonna Keep ‘Em Down on the Farm?” (Columbia A2687, 1918) 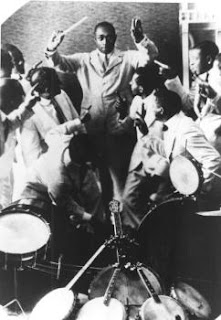 James Reese Europe made some of the most exciting – and jazz-like – records of the pre-jazz era. He took orchestral music, combined it with ragtime, and sped it up to ridiculous speeds. The result was as revolutionary as it was entertaining.

” is his most well-known recording. Right away, it takes your breath away as the full orchestra plays ragtime at full speed. The band resumes this tempo again and again throughout the record and the effect is exhilarating. There are two places where they take a break from the breakneck pace. The first is a passage that invokes grand marching band music, although it is performed with a lighthearted touch. In the second of the slower passages, the musical theme of the first is deconstructed and turned into something even lighter, reminiscent of whimsical ballroom dance. This time, when the rapid ragtime melody reappears, it is even faster and more frenetic. Finally, the record ends with a brief section featuring a brisk, brilliant workout by the drummer.

~ You may also like: Europe’s Society Band, “Down Home Rag 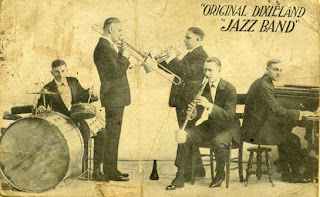 The Original Dixieland Jazz Band
“Livery Stable Blues” (Victor 18255, 1917)
Jazz emerged as a distinct style at the turn of the 20th century in the ODJB’s home town of New Orleans, where African American brass and string bands refined the syncopations of ragtime and added unique touches such as flattened (or “blue”) notes, vocalized tones and “hot” syncopation. Unfortunately, racial prejudices prevented black jazz bands from recording until the early 1920s. Although the jazz musicianship of the all-white Original Dixieland Jazz Band was inferior to the blacks they copied, they were the first to get the opportunity to record this new music.
“Livery Stable Blues

” was a novelty tune where the band used their instruments to imitate various barnyard animals. It was the first jazz record ever released and became an instant hit, kick-starting the jazz craze that would dominate popular music for the next three decades. While not on the level of the top jazz musicians of the day, there was a reason this record was a surprise hit. The band had quite a bit of experience playing authentic jazz in New Orleans and they display solid fundamentals on this record. The animal imitations are quite good, especially band leader and cornetist Nick LaRocca’s whinnying horse.
~ You may also like: The Original Dixieland Jazz Band, “Darktown Strutter’s Ball