Ragtime is one of the first recorded styles to unmistakably fit into the modern American music tradition: a blending of polyrhythmic African American plantation music with aspects of European classical music. The style got its name because of its highly syncopated (“ragged time”) structure, with notes falling slightly ahead of or behind the beat where people expected them. The novel sound captured the public’s attention and became the sound of America at the turn of the century. 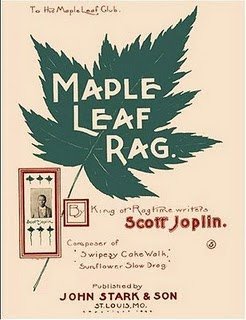 Scott Joplin was the undisputed king of ragtime, and no other composer did as much to popularize the style. Ragtime is the first recorded style that fits into the modern American music tradition: a blending of polyrhythmic African-American plantation music with aspects of European classical music. The style got its name because of its highly syncopated (“ragged time”) structure, with notes falling slightly ahead of or behind the beat where people expected them. The novel sound took hold of the public and became the sound of America at the turn of the century. And the undisputed king of ragtime was Scott Joplin.
At the height of ragtime’s popularity, print was the only medium for mass distribution of music, and ragtime compositions proved very popular among amateur musicians. “Maple Leaf Rag,” first published in 1899, sold over seven million copies and remains Joplin’s most popular work. As player pianos became widely available in the early 1900s, piano rolls became another way of distributing ragtime music. These allowed a performance to be captured, reproduced and accurately recreated on any player piano in the world.
I have a recording made by the Smithsonian Institute in 1986, which was taken from a piano roll made in 1916 by Joplin himself. For me, this is the quintessential recording of this song. What strikes me is how much slower and more deliberate it is than any other version of the song I have ever heard. It is a tempo that allows you to fully appreciate every note of the piece as it was written, and it leaves no doubt about Joplin’s abilities as a composer. (Note: the link above is a slightly sped up transfer of that same piano roll that runs 3:07, which is 14 seconds faster than the Smithsonian's more accurate 3:21 running time.)

Joplin thought of himself as a classical composer, and meticulously sought to elevate ragtime to a respectable art form. Fortunately for us, others would bring it back down to a more organic style, improvising variations that burst Joplin’s rigid boundaries and lead to the creation of jazz.
~ You may also like another Scott Joplin composition: “The Entertainer

While ragtime originated as piano music, it was soon adapted for ensembles and it was not unusual to hear marching bands or string bands playing it. In this rare recording, the London Regimental Band carries the melody, but unusually it is drummer James Lent who takes center stage. Lent prominently taps out the phenomenal, ragtime rhythm with rapid-fire precision. The sound clarity is amazing for its time, thanks to the Lambert Company’s innovative celluloid cylinders.

The Haydn Quartet was one of the more prolific “barbershop quartet” groups of the day. (They were also known as the Edison Male Quartet when they recorded for the Edison record label.) While most of the music of the acoustic era featured the kind of bold, boisterous vocals that could be heard through the noise, this music provides a great example of a more subdued vocal style that was able to work in the medium. The singers still had to have strong, loud voices, to be sure, but the style was slower and more sentimental. With lovely four-part harmony and powerful, dramatic singing, “Sweet Adeline” is one of the group’s finest recordings. 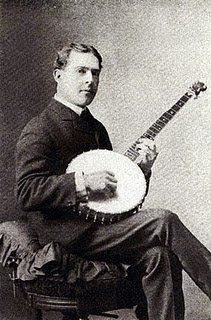 The Ossman-Dudley Trio
“St. Louis Tickle” (Victor 4624, 1906)
Here is an enjoyable early string band recording of ragtime, with Vess Ossman’s five-string banjo carrying the ragged melody. While all of Ossman’s solo work is impressive, I particularly like him in this context. The other instruments help give the recording some shape, alternately amplifying the banjo’s sound and giving Ossman a steady rhythm against which his playing sounds all the more engaging. The measured pace of the recording may be surprising to ears accustomed to the speed of modern styles like jazz and bluegrass. Still, even at this pace one can hear the rhythmic complexity and perhaps get a sense of how different ragtime sounded from traditional string band music.
~ You may also like: Vess Ossman, "Buffalo Rag" (Victor 4628, 1906)
Posted by Rico Detroit at 12:00 PM